Orlando is a city located in Central Florida, it is at the center of the third-largest metropolitan area in Florida. This Florida city is known by the nicknames “City Beautiful” and “Theme Park Capital of the World” and is famous for being home to several world-famous theme parks like the Walt Disney World and Universal Studios resorts and for being one of the top American cities for conferences and conventions. In total, over 75 million people visit the city each year, making it one of the most popular tourist destinations, not only in the US but around the world. In this post, we will unveil the best areas to stay in Orlando.

As mentioned above, Orlando’s main tourist attractions are the Walt Disney World Resort and Universal Studios Resort. However, this Florida city is home to many more theme parks and family-friendly attractions such as Magic Kingdom, SeaWorld Orlando, Epcot, or the Kennedy Space Center. Needless to say, Orlando is the perfect place for family holidays.

The good news is that Orlando can be an adult-friendly destination too! Once you’re done spoiling your inner child at Universal’s Wizarding World of Harry Potter, you can stroll around Lake Eola Park or go up the ICON Orlando observation wheel. At night, you can enjoy a nice dinner at one of the many up-and-coming Orlando restaurants and then go for cocktails or hit the dancefloor at a salsa bar.

The climate in Orlando is defined by its long, hot summers and mild winters. The best time to travel to Orlando is from March to May, and then from October to December, when temperatures are not oppressively high. However, it is recommended to book accommodation in advance no matter the date.

Orlando International Airport is located in the southwest of the city. It offers domestic flights to every corner of the US, as well as international connections to Europe, Latin America, and Canada.

Also, Orlando has transport options such as tram, trains, and buses. However, it is recommended to stay with your own car or rent one for better access to the parks and attractions. You can rent a cheap car in Orlando here.

The best area to stay in Orlando is, without a doubt, Celebration, the area where Walt Disney World is located. See accommodation in Celebration.

Here’s a guide with the best areas to stay in Orlando, Florida.

Magic Village Yards Trademark Collection by Wyndham is situated in Orlando, Florida, 2.5 mi from Disney’s Hollywood Studios. This all-villa resort has an outdoor heated pool and guests can enjoy lunch and dinner at the restaurant. Shuttle service is provided to select theme parks.

Stay Near the Parks and Attractions 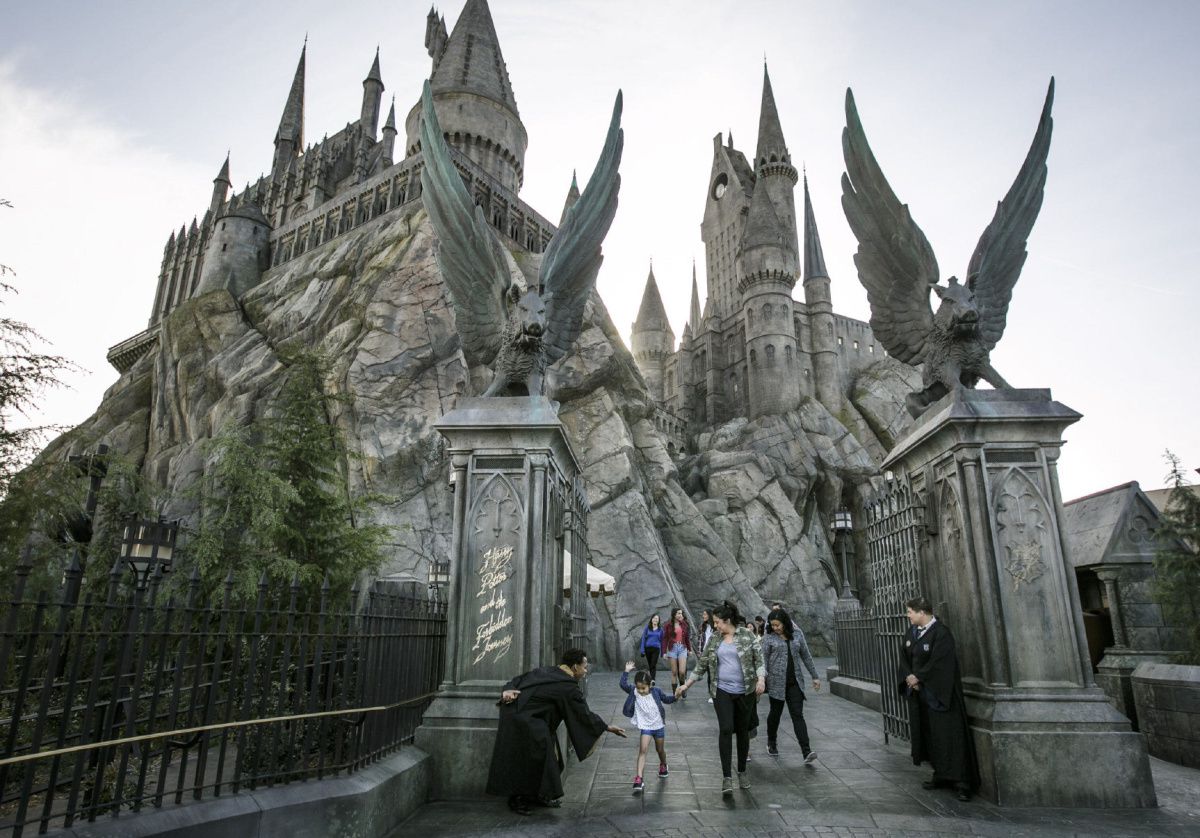 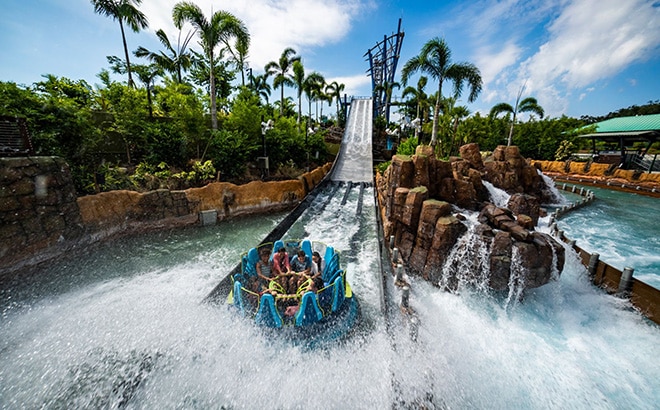 The Best Areas to Stay in Orlando, Florida

Celebration is a lively area originally designed by the Walt Disney Company and it’s located 17 miles southwest of Downtown Orlando.

Although technically Celebration is not in the city per se, it is considered the absolute best area to stay in Orlando thanks to it being home to the city’s top attraction: the Walt Disney World Resort.

Also known by the names Walt Disney World and Disney World, this urban complex and tourist attraction opened in 1971 and it’s basically a city within a city.

To make things more magical during your stay, frequent events, parades, festivals, and nightly firework shows are held in the parks.

This area is great for families, and even better if you’re traveling by car, especially if you wish to visit other theme parks in Orlando.

That said, most chain hotels in the immediate area of the park either belong to Disney World or offer transfer services to the complex and beyond and taxis are widely available.

Universal Studios Florida is another famous theme park located in Orlando. Opened on June 7, 1990, the park’s theme is the entertainment industry, in particular movies and television. It includes a production studio and is part of the Universal Orlando Resort complex.

It is located southwest of Downtown Orlando along Universal Blvd and really close to International Drive.

This huge complex is home to two theme parks: Universal Studios Florida (Home of The Wizarding World of Harry Potter) and Universal’s Islands of Adventure, as well as the Volcano Bay water park.

All of the hotels located within the park and mentioned above offer Early Park Admission to the rides at The Wizarding World of Harry Potter and Volcano Bay and some of them even have free unlimited Universal Express Pass for staying customers.

If you are not planning to stay in an “official” resort, you’ll be happy to know that this area still offers some great independent hotels and a few budget motels.

Not only in the area around Universal much more central than Celebration, but it is also a livelier area. Many shopping centers and Outlet Malls are located on International Drive, and smaller-scale theme park Fun Spot America is also nearby.

All these offer Early Park Admission into The Wizarding World of Harry Potter and Universal’s Volcano Bay.

** These hotels also include a free unlimited Universal Express Pass for use at participating rides at Universal Studios Florida and Universal’s Islands of Adventure.

SeaWorld is located around International Drive, not too far from Universal Studios.

SeaWorld is the third one of the main theme parks in Florida, known, mainly, for its orca and dolphin live shows.

Near SeaWorld, you’ll find the Aquatica park and the Discovery Cove that will give you a glimpse of life in the oceans through entertainment and games.

SeaWorld is one of the most visited attractions by families during the summer. In this area, you will find comfortable hotels close to the attractions.

Those staying near SeaWorld can attend the live shows, visit attractions and enjoy the local food and souvenir shops.

Other than SeaWorld, this area is home to ICON Park. With dozens of shops, world-class restaurants and a 400-ft-tall giant observation wheel.

The area near SeaWorld is recommended among the best areas to stay in Orlando, thanks, of course, to its parks, but also to its restaurants and luxury hotels.

Kissimmee is one of the cheapest areas to stay in Orlando.

This area is a less than a half-hour-drive from Downtown Orlando, Universal Studios and Walt Disney World. So we could say it’s pretty well-located.

A great asset when staying in Kissimmee is that is well-connected by public transport, including buses and trains.

In addition, this area is close to the airport, so it’s great if you’re in town for a short time.

In addition to being close to Orlando’s theme parks, Kissimmee offers places to connect with nature, from hiking trails to hot air balloon rides with breathtaking views.

For those who love shopping, there are also malls and trendy shops in Kissimmee, as well as restaurants and bars.

Kissimmee is one of the best areas to stay in Orlando, offering affordable accommodation away from the hustle and bustle of Downtown and easy access to major attractions.

Why is this a recommended area to stay in Orlando, FL:

It’s one of the busiest areas in town, with plenty of places to see.

Things to do in Downtown Orlando range from attending the theater and visiting the parks and cultural centers.

The Amway Center, for example, has live shows, family events and more. In addition, for basketball fans, this area is home the Orlando Magic of the NBA.

Downtown Orlando also has Church Street, a place full of restaurants and bars that are especially lively at night.

Most LGBT-oriented businesses, bars and clubs are located in this district, considered Orlando’s gay area.

In addition, Downtown is known as a business center, thanks to its offices and large companies that make it one of the best areas to stay in Orlando for business.

Staying in Downtown allows travelers to access the attractions of the city by public transport or car, so it is recommended as one of the best areas to stay in Orlando.

Why is this a recommended area to stay in Orlando:

Another recommended area to stay in Orlando is near Orlando International Airport, located southeast of the city.

Staying in this area allows the transfer to other neighborhoods of Orlando through its good public transport connections and car rental places.

Orlando International Airport offers flights to national and international destinations and the surrounding area is ideal for short stays in the city.

It is possible to reach Orlando attractions and theme parks from here via highways, shuttle, bus or taxi.

Near the airport, you will find restaurants, fashion boutiques and souvenir shops, fast food outlets and some bars.

The surroundings of the airport are among the best areas to stay in Orlando and there are some budget hotels here.

What is the best area to stay in Orlando?

The best area to stay in Orlando if you’re planning to visit Walt Disney World and spend most of your time there is Celebration, in Lake Buena Vista. Most hotels in this area offer free shuttles to Walt Disney World and some (particularly the higher-end ones) even have free transfers to Universal Studios and SeaWorld Florida.

Where should I stay in Orlando to visit ALL the theme parks?

The most central area between the three main theme parks in Orlando (Disney World, Universal, and SeaWorld) is around International Drive, one of the city’s main thoroughfares offering easy access to the highways and connecting, not only the main parks but also Orlando’s top malls and entertainment areas.

Do I get free admission to Disney World by staying at a Disney Resort?

Do I get free admission to Universal Studios by staying at a Universal Orlando Resort?

What is the best area to stay in Orlando for adults?

The area around ICON Park, Orlando’s giant observation wheel is a great area to stay if you’re not in town exclusively to visit the theme parks. That said, this area is also perfectly convenient to visit them as well since its located near SeaWorld and International Drive.

What is the best area to stay in Orlando without a car?

Orlando’s attractions are scattered around a pretty big area, so you’ll want to stay at a central place. International Drive is the best location to be close to everything (and save on Uber rides). A little further away is Kissimmee, 20 minutes by Uber from the three main theme parks AND the downtown area. 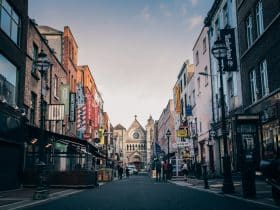