Santa Marta is the capital of the department of Magdalena, in northern Colombia.

It was founded by the Spanish in 1525, which makes it the oldest city in Colombia and the fourth oldest in South America, after Quito (Ecuador), Cusco (Peru) and Cumaná (Venezuela).

Its historical and cultural attractions and its geographical location between the Sierra Nevada de Santa Marta and the Caribbean Sea make it one of the main tourist destinations in the Atlantic Coast.

Although it is the oldest city in Colombia, most of the colonial heritage of Santa Marta was practically destroyed by English and Dutch pirates.

Today, Santa Marta is a busy city dedicated to sun beach tourism. Not far from Santa Marta are some of the best beaches in the country, particularly in the Tayrona National Park and its surroundings.

The climate of Santa Marta is warm, but the heat here is drier than in Cartagena, and the breeze from the sea in the afternoon keeps the city cool at night.

El Rodadero, a luxury area in the south of Santa Marta, has the highest concentration of accommodation, restaurants and nightlife. (See accommodation in El Rodadero).

This is a guide with the best areas to stay in Santa Marta, Colombia.

The Best Areas to stay in Santa Marta

The Rodadero is a coastal area of ​Santa Marta located about 5 kilometers south of the Historic Center.

El Rodadero is also the party area par excellence of Santa Marta. The nightlife here is very popular with young people, both locals and tourists. The bars and clubs of El Rodadero remain open (officially) until 3 am.

In addition to its nightlife, Rodadero is also popular for its beach. Very busy in high season, the beach of El Rodadero is calm and clean and offers many services.

El Rodadero is also a safe area to stay in Santa Marta.

Santa Marta’s Old Town (Centro Historico) is the historic center and birthplace of Santa Marta and where the social, commercial, cultural and political life of the city develops.

Centro Histórico is located at the western end of the city, next to the coast of the Caribbean Sea.

Although Santa Marta is the oldest city in Colombia, much of its colonial architectural heritage was destroyed by pirate attacks. However, this coastal city still retains some examples of architecture from the 18th and 19th centuries, as well as the cathedral and some museums, including the house where Simón Bolívar died.

In recent years, local authorities have invested in restoring and recovering the streets of the Old Town of Santa Marta to recover its former glory.

The negative part about staying in this area is that it is not the safest neighborhood to stay in Santa Marta. Caution is advised, especially during the night.

Bello Horizonte is located south of El Rodadero, about 12 kilometers south of the Historic Center of Santa Marta.

It is another coastal place, with tourist apartments and hotels typical of the Caribbean coast. However, Bello Horizonte has a more relaxed face than El Rodadero.

The beach of Bello Horizonte is quieter and wider than Rodadero, the sector of Irotama is highly recommended for families since it has a protected sector that does not allow boats or jet skis.

Bello Horizonte offers a, somehow, less touristy and more local view of life in Santa Marta. In the morning, local fishermen gather their nets on the beach, creating a picturesque scene.

Bello Horizonte is also a safe area to stay in Santa Marta. 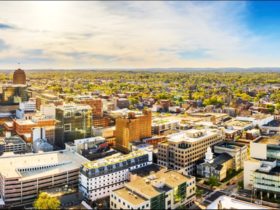